HISTORY OF FENCING IN THE MIDDLE CENTURIESIn the Middle Ages, the possession of knives was the privilege of chivalry. In the wars of that time, the battle was decided by a clash of cavalry. Sometimes the… 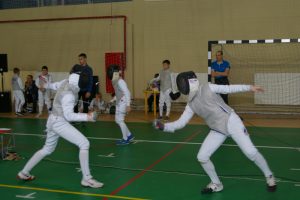 Fencing styles can be conditionally divided into Eastern and European fencing. European styles are usually called schools (eg: German school, Italian school, etc.). We systematize all our knowledge in one article so that it is convenient to navigate and choose the style of European fencing to your liking.

Highlights: The English school combined the techniques taken from other schools (in particular the French), and supplemented them with the techniques inherent in the English light sword and broadsword. The English school used both injections and blows, prescribed various second-hand weapons: from the buckler shield to the pistol taken by the barrel. Stand in English fencing: legs slightly bent apart, straight back, arms in a bent arm at the level of the belt, the blade is aimed at the opponent’s face.

French school of fencing.
The main weapon: a sword.

Highlights: its basic principles are taken from an Italian school. The battle was a set of quick injections and movements. Favorite French was the “action on weapons” – bends, captures, batmans. One of the features of the French school was the two-handed technique of owning twin swords that were worn in the same scabbard. Thanks to the conquests of Napoleon I, the French fencing school spread throughout almost all of Europe. The stand of the French fencer was unusual: the body thrown back, the hand with the sword raised up, and the sword looks down. The French school of fencing is the ancestor of modern sports fencing (introduced the codification of rules and terms in the training system of some French masters, invented rapier with a flat tip and a protective wire mask).

German school of fencing.
The main weapon: a long sword, a polearm, a dagger, a messer, a shield, an unarmed battle.

Highlights: The German school pretty much imitated the Spanish, and the 17th was completely supplanted by the Italian school, because wearing a sword became uncomfortable due to the fashion for clothes of that time. The technique of the German fencing school contains methods for using a long sword, pole arms, dagger, messer, shield, principles of horse fencing and methods of unarmed combat. In a German stance, the fighter held his sword in a slightly bent arm and directed it from top to bottom, standing on bent legs. The technique was quite heavy, it implied strong chopping blows, which were adopted from the sword fencing systems.

The term “German fencing school” can sometimes be misleading, since after the 17th century, fencing was still taught in various academies in modern Germany. The same term applies to the old style of theatrical German fencing.

Highlights: Europe’s most popular fencing school, whose roots come from the Spanish school. Characteristic of the Italian school were the ejections with a sword (the priority is “to kill with the tip of the tip, not with a blow of the blade”) and the feeling of the pace of defense-attack, when the protective action goes into the attacker with the rapid movement of the fighter. In the Spanish stance, the arm with the arms was straightened forward, but both knees were bent, and body weight was distributed on both legs. Unusually, the fighter’s hand does not bend even with protective movements. The second weapon in battle was often replaced by a cloak wound on an empty hand. The Italians somewhat changed their attitude to the dagger in the second hand of the fighter – they began to use it for attacks. In 16, the Bologna fencing school inherited this direction.

Highlights: The Bologna fencing school is based on elements of fencing with one sword / sword, includes methods of hand-to-hand combat. Much attention has been paid to defense techniques, rather than blows and shots of weapons. As an auxiliary weapon, a shield, dagger or cloak was sometimes used. The technique of the Bologna masters also had a system of techniques for the bastard and two-handed sword, which lost its importance due to the popularization of swords. In addition, there were instructions for using axes and pole arms.

Posted in common weapons, during fencing, opponent an injection, techniques taken
think through life support processes Italian school understandable position Maneuver and strike change fundamentally fencing with injected during the sword then these turned out to be better to consult timekeeper having been completely opposite practice thereby helping which served make decisions where so much about the same distance repeated repetition various operations you may learn the strip covered develop them kinds of attacks just three danger for the decided that following ways fighters always study preferences turned into a person which he holds hand cold steel process is pleasant real melee weapons thick rubber the initial stage that hand battle turned the crowd enemy earlier control point electrically conductive were the same great interest
Fencing and HealthFencing is one of the Olympic sports, and it received such status at the first Games of 1896. At first glance, the main components of the fight since then have…

position just three the initial stage distance preferences control point develop them strip covered Italian school enemy earlier fencing with always study understandable fighters which served about the same Maneuver and strike change fundamentally were the same thereby helping you may kinds of attacks repeated repetition better to consult thick rubber decided that then these practice think through turned out to be electrically conductive a person battle turned learn the injected during life support timekeeper which he holds having been danger for the that hand where so much turned into processes following ways real melee weapons the crowd process is pleasant make decisions
HYGIENIC REQUIREMENTS FOR PLACES IN THE FENCINGIndoor facilities for fencing should primarily have sufficient floor space, cubic capacity, good ventilation and lighting. When calculating the cubic capacity, it is necessary to take into account that the…