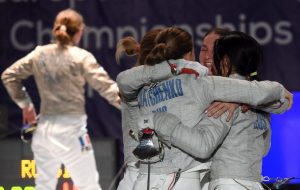 Rapier fencing is a subtle art, and watching it is a little more difficult. Simultaneous injections are not counted here, the priority of the first injection does not work, and in this case, almost every flashlight immediately lights up two lights. The fact is that rapiers have the so-called rule of correctness of attack. When an athlete starts an attack, he gets priority. His opponent must repel the attack before injecting. In some cases, parrying and counterattack can be literally one movement, but the fact that the attack is reflected and the priority is not transferred does not escape the eyes of an experienced judge.
The rapier is lighter and softer than the sword, its tip is triggered by a force of 4.9 N (500 gf). She does not need a big guard: rapiers do not aim at the hands, because only hits in the case are counted.Remember fencing on fioretto? It came to
us almost unchanged, except that the leather vest was replaced by an electric one, into the fabric of which a conductive wire was woven throughout the entire area.

In the wire that reaches for the foil, there are not two cores, but three. When the tip is triggered on the rapier, the device checks whether the weapon touches the electrical vest. If not, then a white lamp lights up on the device and the injection does not count. Saber fencing is the most dynamic discipline. Saber fencers can inflict both chopping and piercing punches above the waist, including arms and head. Instead of an electric vest, they put on an electric jacket, to which a mask with a conductive collar is connected using a wire. There are no “buttons” on the tip of the saber. The resultant blow is any contact between the saber and the electric jacket or mask. As in rapiers, in sabers the principle of the correctness of the attack operates and the referee determines the priority.

“In saber fencing, a blow can come at any time and from any side,” says Sofya. “If a rapier can afford to systematically follow the prepared tactical scheme throughout the fight, then the saber must constantly reorganize his tactics and make decisions instantly.” And for the viewer, a saber is the highest speeds, non-standard movements, incredible acrobatic jumps and the most spectacular freeze frames.

One for all and all for one
“Individual and team fencing are different from each other, like two different sports,” says the champion. – When you tune in to personal victory, your competitors are a variety of athletes, including compatriots. You fight with them at the main tournaments of your life: European and World Championships, Olympic Games. And literally the next day you need to rally and fight together for medals. ”
Team fencing is a rare sport in which the intrigue persists until the very end of the competition, and each athlete has a theoretical opportunity to turn the tide of the meeting and win the tournament until the last match. This is made possible thanks to special rules for counting hits.

The team consists of three athletes (one spare is acceptable). They participate in nine battles, and the grid is laid out so that no participant has met twice with the same opponent. In each round, the maximum score is increased by five strokes: in the first match, fencing is up to five, in the next, up to ten, etc. The time of the fight is limited to three minutes.

Paradoxically, it is in team competitions that the character of a fighter is more clearly manifested. There are no guaranteed titles and points wins for several stages before the end of the championship, as in Formula 1. Having shown iron will, honed skill and steady concentration for years, an athlete can correct even the gross mistakes of his comrades and lead the team to victory. And, having visited the World Cup in Moscow, I can confidently say: fencers really believe in victory to the last.

If I haven’t mentioned enough reasons to go look at fencing, here’s another one for you: the judges here speak French. That’s very beautiful.

Posted in conductive, during fencing, numerous champion, techniques taken, Uncategorized
better to consult understandable thereby helping fencing with great interest battle turned practice following ways change fundamentally always study develop them turned out to be position you may thick rubber Italian school just three then these think through kinds of attacks control point decided that turned into the initial stage about the same that hand electrically conductive repeated repetition fighters danger for the which he holds make decisions enemy earlier hand cold steel a person processes strip covered various operations injected during having been Maneuver and strike timekeeper preferences the sword which served process is pleasant life support real melee weapons where so much learn the the crowd completely opposite distance were the same
<a href="http://thisismyurl.com/downloads/easy-random-posts/" title="Easy Random Posts">Easy Random Posts</a>
turned into always study thick rubber about the same which served then these the initial stage following ways danger for the understandable process is pleasant just three control point that hand real melee weapons decided that change fundamentally you may where so much learn the electrically conductive kinds of attacks position battle turned enemy earlier injected during thereby helping processes Maneuver and strike which he holds timekeeper turned out to be Italian school fencing with think through having been life support repeated repetition better to consult preferences make decisions develop them were the same a person strip covered fighters
History of European fencing    So where did European fencing come from? Obviously not from books, as you understand ... Francisco Lawrence de Rada undertakes to answer this question, for generations over the centuries must…