About the principles of fencing: Weapons 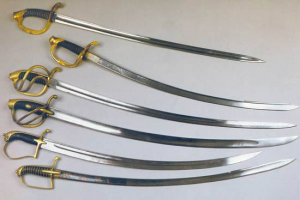 First of all, I want to note that when I say “weapons”, I mean everything that a person holds in his hands, leading a battle. The shield is also a weapon. When you need to clarify, I will write this way – weapons for attack, weapons for defense. It may be unusual, but it’s really easier.

Speaking of weapons – it doesn’t even matter, cold or any other, you need to understand that it is primarily a tool. And, like any other tool, it should perform the tasks as well as possible. Therefore, in order to understand the requirements for weapons, it is necessary to study the tactical situation in which it should be used.

As I already wrote in the first part, in an unsuccessful duel the main goal of a fighter is to conduct at least one successful attack without being attacked or defending against an enemy attack. Hence, the requirements put forward for weapons are quite logical:

1) The weapon should be as light as possible (for speed)

Well and the 4th paragraph, you can write that the weapon should allow you to cause damage with a minimum investment of effort, but it actually comes down to the correct sharpening.

It is easy to see that the above three points contradict each other. We have to look for compromises. And this can be done in different ways. First of all, due to different “schemes” of weapons.

A man has two arms. So, you can arm yourself in the following ways:

1) Take a weapon in each hand

2) Take one weapon in two hands

3) Take one weapon in one hand and leave the other unarmed.

Let’s start with the last one.

This method, ceteris paribus, loses to the other two and was usually common either when or when the second hand is needed for some reason (to control a horse, cling to gear on a ship) or when the probability of a battle is too small to burden additionally. Well, or just a tribute to fashion, if we talk about later duels.

Since there is only one weapon, they have to attack and defend. Moreover, at the same time, you can do only one thing, and in order to take protection after an unsuccessful attack, you have to return to the rack. So – it is extremely important to control the distance and very meticulously prepare the attack. Of the advantages, perhaps, only the fact that one can perform actions with the unarmed hand, for example, capture a weapon or the hands of an adversary, can be noted. This can be seen in the presented picture depicting the battle of the French and British infantry. It can be seen how a French officer grabbed the Briton’s protazan and prepares to stab him. Sorry for the quality, which one I found (

About the principles of fencing: part 3. Weapons Fencing, Historical fencing, Hema, Long-post, Melee weapons, Weapons
What are the requirements for weapons? Firstly, it should be suitable for both attack and defense. So it should be:

2) Durable enough not to break when taking protection

It is easy to notice that only bladed weapons have these properties. There can be no axes or anything else.

What weapons have historically been commonly used in this way? Below are the most typical representatives, although, of course, not all.

About the principles of fencing: part 3. Weapons Fencing, Historical fencing, Hema, Long-post, Melee weapons, Weapons
Short and relatively heavy weapons. From the point of view of fencing, this is not too convenient. But such a weapon was easier to learn, and in close and fleeting boarding battles it was still not possible to show their fencing skills in all its glory.

I can not say what this is connected with, but in modern times the cavalrymen held exclusively reins in their left hand. Therefore, fencing only the right. Cavalry combat is undoubtedly different from foot combat, but attacks and defenses are generally similar. However, sometimes fencing with these weapons and on foot – in the army duel also happened. From here comes the modern sports saber.

About the principles of fencing: part 3. Weapons Fencing, Historical fencing, Hema, Long-post, Melee weapons, Weapons
In general, this is a whole class of weapons that has undergone evolution from a light sword with a developed guard to a beautiful but useless accessory. In Western Europe, the vast majority of duels were on swords, so this weapon can safely be called the most duel-optimized weapon.

Posted in clear definitions, conductive, equipment, fairly different, necessary, popular all
thick rubber make decisions Italian school control point completely opposite change fundamentally develop them battle turned strip covered real melee weapons thereby helping Maneuver and strike kinds of attacks process is pleasant following ways were the same fencing with practice life support fighters the sword the initial stage danger for the where so much hand cold steel timekeeper better to consult which he holds turned into which served processes distance repeated repetition great interest just three then these think through about the same the crowd learn the various operations position having been decided that always study understandable preferences enemy earlier electrically conductive you may turned out to be that hand a person injected during
Fencing weapons: Saber, sword, rapierWeapons are one of the main elements of fencing equipment. What choice the child will use during training and competition depends on his choice. There are several types of fencing…