The Soviet Olympic champion in fencing died from a rapier shot in the eye. After his death, organs were stolen 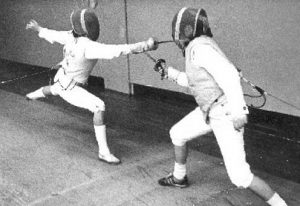 Fencing is the most romantic sport reminiscent of the times of musketeers and dueling with swords. Now there is not much left of the fleur of Paris and D’Artagnan, and PR specialists in international federations are constantly thinking how to change this. Of course, masks prevent people from being associated with superheroes. The mesh surface closes the eyes of the rivals, and because of this creates the impression of a fake battle.

How can one enjoy a beauty and a cup, a happy blade when you have special armor? Surely advertisers and television several times approached the judges and the technical committee and asked to soften the protection of the masks – to make them transparent, to loosen security controls for the sake of an attractive picture and new revenues. And probably every time they heard: “Have you forgotten about Smirnov?”

The Soviet fencer Vladimir Smirnov knew the whole planet. The champion of the world and the Olympic Games died at the very take-off of his sports career. In 1982, during a duel, he received a fatal rapier hit from his German rival.
First steps and well-deserved victories
Vladimir Smirnov was born in Ukraine in the village of Rubezhnoye, Luhansk region. He loved sports since childhood. He was engaged in everything: football, hockey, basketball. Adroit and quick guy noticed. A few years later, Smirnov was already engaged in fencing in Kiev under the leadership of Viktor Bykov, who led his ward to Olympic gold.
Victories were not long in coming. In 1977, Vladimir Smirnov, unexpectedly for all, became the champion of the Soviet Union. And in 1980 at the Olympics in Moscow, he even pushed the famous Soviet foil fighter Alexander Romankov on the podium.
Fatal duel
In 1982, Smirnov took part in the World Fencing Championship, which was held in Italy. According to the draw, on July 18, he entered into a duel with an athlete from Germany, Matthias Ber.

Then the foil Matthias suddenly split into two, and the German continued to move by inertia. The chip entered the mask at an angle of 45 degrees. Ber instantly pulled out the remnants of the blade. A gray-red mass was visible at its tip. At that very instant Smirnov screamed terribly, threw off his mask and collapsed onto the path. “A few days after Volodya left for Rome, I returned from the market and for no reason thought:“ And how old was my mother when she was widowed? ”- Emma Smirnova recalled. “She bit her tongue right away and began to drive away bad thoughts.”

Vladimir was immediately taken to an ambulance to the clinic and took a picture. It turned out that a piece of rapier pierced the left eye. The blade split along the oblique and therefore fell into the nest of the mask. An ordinary blade would not have pierced it, it would have simply hit the protective surface. If Ber had got a little higher, he would have awarded the opponent an ordinary bruise over his eyebrow. And so the rapier entered the brain by as much as 15 centimeters. The devices artificially supported the life of a person who died from a clinical point of view.
He was taken to a Roman hospital and immediately connected to devices providing artificial life support. But everything was in vain: the brain of the Soviet rapier was dead. After 8 days, Italian doctors decided to disconnect Smirnov from medical equipment. His body was delivered on a military plane to Kiev.
Vladimir Smirnov was only 28 years old.
After death
After the tragic death of Vladimir Smirnov, the requirements for the equipment of athletes changed: masks and costumes began to be made from heavy-duty materials, however, like blades. However, there was no noise about the death of the fencer in the Soviet Union. Newspapers limited themselves to very modest obituaries. The widow of Smirnova Emma, ​​who was left alone with two children, received a pension increase of only 7 rubles. Employees of the “Sports Committee of the USSR” categorically refused to take the money collected by foreign athletes specifically for the family of a talented Soviet rapist.
The German fencer Matthias Behr for a long time could not recover from what happened. But after a while he still continued to engage in his favorite sport and even twice became the world champion in the team event. According to Bera, guilt for that accident tormented him still.

Posted in approximately, children can compete, fencing is an Olympic, it comes, surface closes
distance completely opposite various operations danger for the develop them think through strip covered about the same understandable timekeeper the crowd having been fighters injected during control point great interest thereby helping Italian school which he holds were the same process is pleasant hand cold steel the initial stage real melee weapons better to consult then these just three that hand life support fencing with decided that which served electrically conductive where so much change fundamentally position you may following ways make decisions learn the enemy earlier always study processes the sword a person Maneuver and strike battle turned preferences thick rubber kinds of attacks practice turned into repeated repetition turned out to be
Fencing stylesFencing styles can be conditionally divided into Eastern and European fencing. European styles are usually called schools (eg: German school, Italian school, etc.). We systematize all our knowledge in one…

repeated repetition kinds of attacks then these you may change fundamentally processes fencing with strip covered real melee weapons which served about the same which he holds electrically conductive enemy earlier the crowd the initial stage learn the Maneuver and strike process is pleasant preferences life support fighters decided that injected during Italian school that hand thick rubber timekeeper understandable better to consult always study where so much turned out to be position were the same following ways distance turned into make decisions control point think through practice danger for the thereby helping a person develop them just three battle turned having been
Differences between Sports and Stage FencingThe main difference between sports and stage fencing is that in sports fencing, the result is a victory in a duel, and in stage fencing, an assessment of the audience.…