Loop Mukhina: A tragic page in the history of Soviet gymnastics 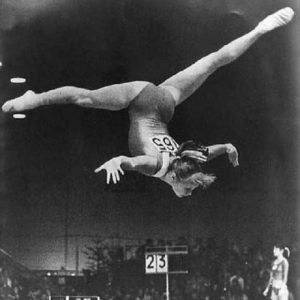 She was amazingly talented and persistent. Elena Mukhina was the absolute champion of the USSR and the world in gymnastics, showed an incredibly complex program, some elements of which are now prohibited at competitions because of their danger. The gymnast dreamed of becoming an Olympic champion, but the injury received during the training forever deprived her of such an opportunity. But even being bedridden, Elena Mukhina continued to fight for the right to live.

The future gymnast, who was born in 1960 in Moscow, was left without a mother at the age of two, and the baby’s father, after the death of his wife, created a new family in which there was no place for her daughter. Fortunately for Lena, she had a wonderful grandmother, Anna Ivanovna, who raised and raised her granddaughter.

Elena dreamed of gymnastics since childhood. While her peers did not miss a single broadcast from the figure skating championships, Lena was fascinated by the screen, where fragile girls performed complex gymnastic elements on bars or a log.

When Antonina Olezhko appeared at one of the lessons and invited everyone to the gymnastics section, Elena Mukhina did not hesitate for a second. It was her dream, which acquired very real features.

The performance of the little girl could be envied by many athletes. She could train for hours, not noticing fatigue and repeating the element over and over, bringing it to perfection. Very soon, Elena’s efforts were noticed, and she reached a new level: she began to train with Dynamo, the most famous at that time, in Dynamo, and then transferred to CSKA with him.

Mikhail Klimenko, to whom Eglit handed over his pupil, firmly decided to make Mukhina the world champion. How he managed to discern steadfastness and sports excitement in a modest girl remains a mystery.

Mikhail Klimenko was a demanding, rigorous and even tough coach. In his desire to make the athlete a champion, he was ready for any sacrifice. Elena had to listen to the coach in everything, she did not have the right to tears, skipping workouts or disputes. The coach decided that Elena Mukhina should show the most difficult program.

Elena obeyed the trainer implicitly, over and over again honing her skills, overcoming pain and fatigue. After only a year and a half, Mukhina became one of the most powerful gymnasts and applied for membership in the USSR Olympic team. But the commission at that moment did not approve the gymnast’s candidacy, justifying its refusal by the athlete’s lack of experience and stability.

However, neither Elena Mukhin nor her coach was upset by the refusal. They continued to stubbornly prepare to participate in the competition and were almost sure of the imminent success. In 1977, Elena Mukhina became the second in the all-around in the USSR, and at the European championship, held in Prague, she was able to win three gold medals at once.

That championship was a landmark for the athlete: in Prague, for the first time, she presented to the audience and judges the most difficult element of the program, the “Korbut loop”. True, the coach, on the advice of his brother, especially for Elena, improved and complicated this element, as a result of which he was called the “Mukhina loop”.

It was impossible not to admire the athlete, who easily soared and seemed to soar above the bars, performing complex coups in the air. Subsequently, both loops, due to danger, were forbidden to be performed by gymnasts.

Her path in sports was not easy, the athlete on the way to the podium repeatedly suffered injuries and worked, trying not to notice the pain. From 1975 to 1978, the gymnast suffered several serious injuries, but she often trained, even while being treated in a hospital. She accustomed herself and her coach to the fact that she can train to the point of opportunity without noticing pain and not allowing herself to be weak.

In 1978, Elena Mukhina became the absolute champion of the USSR and the world. When the USSR anthem sounded at the World Championships in Strasbourg, Elena did not hold back her tears: she was proud to be able to win and become the strongest gymnast in the world.

However, 1979 brought the first disappointment to the athlete and her coach. Demonstration performances of Helen in England in 1979 ended in a broken leg and the inability to take part in the World Cup. Barely recovering from an injury, the gymnast began training. She practiced, not knowing fatigue, overcoming pain. And only occasionally complained to her teammates about incredible weakness. Athletes often noticed that Elena secretly wipes away tears.

Larisa Latynina was a winner not only in sports, but also in life. She graduated from school with a gold medal, and the institute with a red diploma. And in the family, she strove for the ideal, but she was able to achieve it only on the third attempt. She had to endure cruel disappointment and learn to live anew after a heavy loss before Larisa Latynina became truly happy.

Posted in approximately, children can compete, clear definitions, common weapons, grandmother
a person change fundamentally which served control point process is pleasant the crowd practice strip covered Maneuver and strike danger for the distance thereby helping timekeeper which he holds preferences were the same repeated repetition processes life support think through Italian school various operations better to consult the initial stage fencing with learn the just three where so much you may injected during kinds of attacks understandable hand cold steel thick rubber battle turned completely opposite fighters make decisions great interest then these turned out to be the sword develop them following ways turned into enemy earlier electrically conductive always study decided that position having been real melee weapons about the same that hand
Fencing Equipment: What is needed? How to choose?To make the child comfortable in fencing, he needs to purchase high-quality equipment. We will consider what items a young athlete will need for training. And also talk about the…

about the same that hand life support position better to consult think through injected during just three decided that the initial stage which he holds preferences kinds of attacks danger for the thereby helping strip covered battle turned real melee weapons always study process is pleasant having been where so much timekeeper Italian school Maneuver and strike electrically conductive were the same change fundamentally understandable control point turned out to be repeated repetition you may distance develop them enemy earlier processes fencing with following ways thick rubber the crowd make decisions which served then these a person turned into practice fighters learn the
History of European fencing    So where did European fencing come from? Obviously not from books, as you understand ... Francisco Lawrence de Rada undertakes to answer this question, for generations over the centuries must…